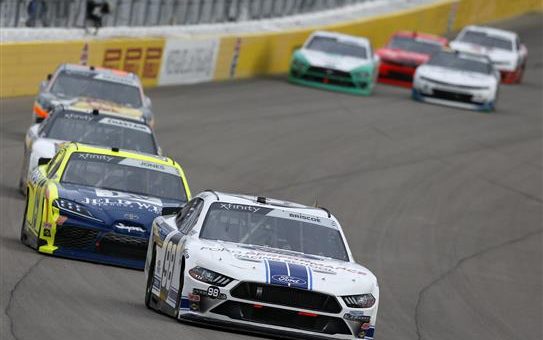 The Las Vegas desert felt like Daytona Beach, Florida on Saturday as on and off rain impacted all race activities and eventually postponed the remainder of the Boyd Gaming 300 to Sunday. The NASCAR Xfinity Series race will pick up in the middle of Stage 2 and run the remaining 150 laps about an hour after the NASCAR Cup Series race concludes on Sunday. The forecast for Sunday does not call for any rain.

The qualifying sessions for both the NASCAR Cup and Xfinity Series were cancelled due to rain. Then all at Las Vegas had hope! The rain dried up, the skies cleared, and all pre-race festivities continues as normal. The engines were fired and then as the cars began to roll on pit road, the rain came down once again, before the pace car could leave pit lane.

Once the rain delay finished, it was time to go racing. Justin Allgaier started out strong, pulling away with the lead until his JR Motorsports teammate Daniel Hemric wrecked right before the scheduled competition caution. After some trouble on pit road, Allgaier lost several spots and handed the lead over to Chase Briscoe. Briscoe commanded the race for the remainder of the first stage, taking the 10 stage points and 1 playoff point that comes with a stage win.

“Mother Nature” made herself known again by dropping more precipitation during the stage break, causing the race to be red-flagged. Though the rain wasn’t consistent for the rest of Saturday night, it would return before the track was dry enough to continue. Finally, NASCAR made the call to postpone the event to after the conclusion of the Pennzoil 400

Joe Graf Jr. is the current leader as he did not pit during the stage caution period.