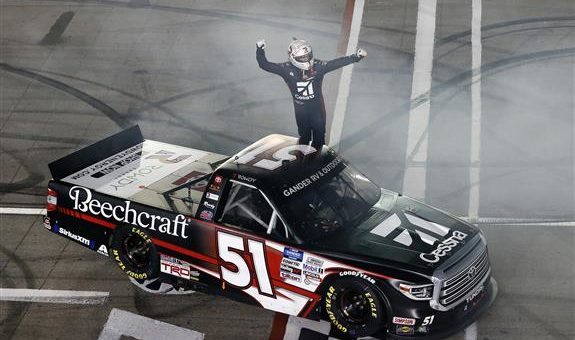 For a record 57th time in his career in just his 151st start, Kyle Busch wins in the NASCAR Gander RV & Outdoors Truck Series. Limited to just five races per year as a NASCAR Cup Series regular, the Las Vegas native has managed to win seven straight starts in the Truck Series dating back to 2018.

Busch led 108 of the 134 laps, an unsurprisingly dominant performance for the 2-time and defending Cup Series champion in the truck that he owns. His teammate and Rookie of the Year contender Christian Eckes challenged him for the lead at the start of the second stage until contact with the wall brought out a caution.

Once the #18 was out of contention, Sheldon Creed took up the mantle of Kyle Busch’s biggest threat. Each restart, Creed would drive to the inside of Busch and run side-by-side with Busch until the #51 would clear the position and pull away.

As far as what Busch thought his biggest challenge was, he said it was his own truck.

The last caution of the race came out when the third Kyle Busch Motorsports truck driven by Raphael Lessard broke loose in Turn 2 and slid up into last week’s winner Grant Enfinger. The two trucks slammed the outside wall and kept driving. The caution didn’t come out until Enfinger drove into Turn 3 and couldn’t keep his truck off the wall.

Trouble for Enfinger and Lessard pic.twitter.com/hckCxJB51B

This set up what would be the final restart of the night, where Busch and Creed swapped the lead once again until Busch pulled away to lead the final 37 laps and win by almost a 6-second margin over polesitter Johnny Sauter.