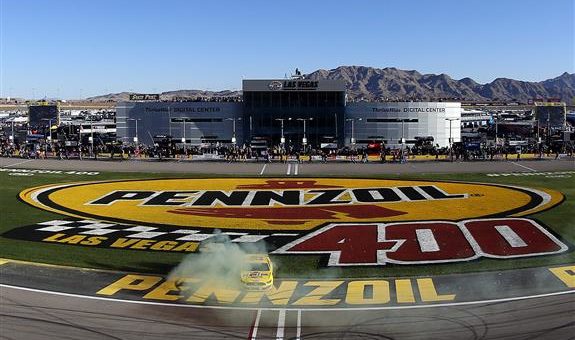 During the final caution period, leaders Ryan Blaney and Alex Bowman, who were the among the fastest cars at the end of the race, came down to pit for fresh tires. Joey Logano and a dozen other cars opted to stay out and maintain track position. The latter strategy prevailed as Joey Logano took the lead on the final restart and took the checkered flag for the second consecutive year in the Pennzoil 400 at Las Vegas Motor Speedway.

“The caution at the end was something we needed to have,” Logano said post-race, “and being able to eventually stay out there, get the clean air, take that clean air was a huge deal for this whole team”

It was Logano’s 24th career NASCAR Cup Series victory and first with new crew chief Paul Wolfe, who moved over from the #2 of Brad Keselowski during the offseason. This is Wolfe’s 30th career Cup win as a crew chief with the previous 29 coming with Team Penske teammate Keselowski.

The race ended under caution as mayhem ensued on the restart, major contact throughout the pack caused a wreck at the white flag. Per NASCAR rules, if the leader of the race takes the white flag and a caution comes out, it effectively ends the race and the leader is declared the winner.

All bets were off as the field took the white flag. 🏳

Here’s what happened further back in the pack to bring out the caution. pic.twitter.com/A55Ln2oQUL

The chaos of the pit strategy and cars spinning created stellar Top-10 performances for drivers and teams that aren’t used to it. Matt DiBenedetto tied his career-best finish of 2nd. It’s also the Wood Brothers’ best finish since winning with Ryan Blaney in June of 2017.  WBR is still searching for their milestone 100th win.

It was not that long ago when DiBenedetto was made a 2020 free agent, with his racing career in question. The very next race after he was told his contract with Leavine Family Racing, he finished 2nd at Bristol. The race winner, Denny Hamlin, stated that “all you car owners are idiots” if they didn’t hire DiBenedetto. Wood Brothers Racing are no idiots and the runner-up finish in just their 2nd race with DiBenedetto may be proof of that.

“This is all just too surreal,” an elated DiBenedetto said, “Tough to be that close, but, hey, this is only the second race of the season. . . This journey has been pretty cool.”

Finishing 3rd was another new driver/team pairing with Ricky Stenhouse Jr. and JTG Daugherty Racing. Austin Dillon earned his first Top-5 since 2018 by finishing 4th. Jimmie Johnson rounded out the Top-5 on stop #2 of his final full season of Cup competition.

The Pennzoil 400 saw 3, 4, even 5-wide racing on every restart throughout the race and the two Team Penske cars, conveniently sponsored in near identical Pennzoil colors, took advantage of most every single one of them, combining to lead 73 of the 267 laps.

A big story of the day was the lack of impact the Toyota cars had at Vegas. The #11, #18, and #95 were all sent to the rear during the pace laps due to an issue in tech inspection that also docked each team 10 driver and owner points. The #96 Toyota stalled at the initial start of the race and even though Daniel Suarez was able to get the car going again eventually, he was never able to recover.

That left just the #19 of Martin Truex Jr. and the #20 of Erik Jones. Truex was easily one of the fastest cars of the race until the end of Stage 2 when the 19 had to give up the lead and return to pit road for loose lug nuts. After the restart, Truex made contact with the wall and cut a tire down, taking him out of contention. At about the same time, Jones had to pit and the team worked under the hood of the car, never cracking the Top-10 in the race.

And now even more damage for @MartinTruex_Jr.

He brings out the caution after getting back into the @LVMotorSpeedway wall. pic.twitter.com/tB8GfHvbke

Chase Elliott swept stages 1 and 2 with arguably the fastest long-run car of the race. After every restart, he would chase down the leader and then Chase would become the leader. During one set of green flag pit stops, Elliott lost the “lead” of the race and was able to take it back on track before all the pit stops cycled through. The second set of green flag pit stops with 50 laps to go were not as kind for NASCAR’s Most Popular Driver. A tire malfunction caused one of his tires to go flat and contact with the wall relegated the #9 team to an eventual 26th place finish.

A lot of focus was on Ross Chastain and how he would perform filling in for the injured Ryan Newman. Chastain raced well in the first stage, working his way up into the Top-10 and giving the team a stage point towards the owner’s point standings. The day unfortunately didn’t finish the way it started as the #6 spun bringing out the final caution spinning on the backstretch. Chastain finished 27th but will continue to drive the #6 until Newman is well enough to return.