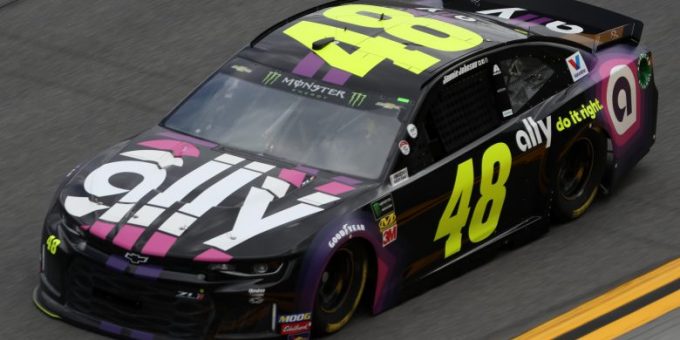 With rain fast approaching and single-file racing plaguing the preseason exhibition race, Jimmie Johnson was running second to Paul Menard, who had led the train of cars for a record 51 of 59 laps. On the backstretch, Johnson made a move for the lead and got right alongside the #21 of Menard, but too close. The moment Menard made even the slightest move away from the wall, the two cars hooked and then that was it. Menard was turned and spun back into the field in a wreck involving all but 3 of the 20 car field.

Barely after the last car settled, the skies opened up, and the rain halted the race for the 3rd and final time. NASCAR called the race after seeing that the radar showed no signs of clearing up anytime soon, making Jimmie Johnson the winner. Declaring a driver, who arguably just wrecked the field, the winner of the race, is never a popular decision. Especially if your name is Paul Menard, “Jimmie does that a lot at these tracks,” Menard told FS1, “Bummed we tore up a car for no reason.” When told Johnson was the winner, he told FOX Sports writer Bob Pockrass, “He causes at least one wreck every plate track…that’s unfortunate he just did it again.” Johnson was willing to take blame if necessary, but had a different point of view of the events during the post-race press conference, “I don’t know what caused it. It’s the last way I want to win a race…I’ll look at it some more on the tape but it was a racing incident from where I was sitting.”

The victory ended Johnson’s streak of 7 straight Clash races where he had wrecked out. Although it doesn’t count towards anything, it was the first time Johnson was in victory lane since June 2017, and the first in the Clash since 2005. Even though his career-long winless streak doesn’t end with the Clash, it was still a meaningful victory for the 7-time champ since it was his first race new sponsor Ally and crew chief Kevin Meendering. Of course, this is still at the expense of Paul Menard’s victory lane dry spell which dates back to July 2011 at the Brickyard.

Kurt Busch, who had the perfect view of the incident as he was running 3rd, gave his view of what caused the crash, “I call it the no-zone, right there in the left-rear quarter panel.” He stated in the post-race press conference that Johnson stayed in that “no-zone” for too long and that caused Menard’s car to get loose and get sucked into the 48. Busch also mentioned that he and owner Chip Ganassi were checking in with NASCAR about the ruling to declare Johnson the winner. A rule at Daytona and Talladega is that you cannot pass below the double yellow line that separates the racing surface from the apron. Busch said that after seeing a replay, he noticed that the 48 may have been been below the yellow line. The rule does allow for exceptions if forced below or avoiding a wreck. Per FOX Sports’ Bob Pockrass, NASCAR said that Johnson was forced and therefore no issue.

Apart from the crash and rain that ended the race, there really wasn’t much noteworthy about it. After a restart, the drivers would race for about 2-3 laps, but the field would settle into a single file line right along the outside wall. Every once in a while, a car or a few would move down to try and make moves, but would never gain any ground and instead end up at the rear of the train. Then rain would come and stop the race for a short while. Track would be dried off and racing resumed. Repeat. Not counting the rain that cut the race 16 laps short of the scheduled 75, Mother Nature stopped the race on two other occasions adding up to a total red flag time of 29 minutes and 36 seconds.

The race concludes the first week of Speedweeks at Daytona. There won’t be any track activity on the track until Thursday for NASCAR Gander Outdoors Truck Series practices and the Gander RV Duels for the Monster Energy NASCAR Cup Series.