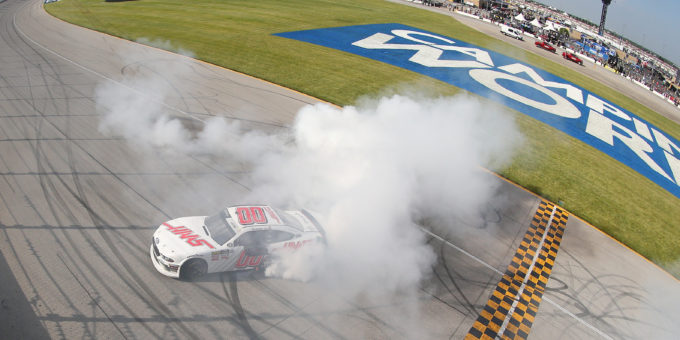 Cole Custer had a monster of a machine, leading 151 out of 200 laps en route to his fourth win of 2019 and sixth of his Xfinity Series career. The young driver out of California dominated at Chicagoland Speedway. The only times he lost the lead were on a restart, which he would get back within 6 laps, and during a green flag pit stop. No one had anything for Custer, and the frustration showed for his championship rival Christopher Bell.

“He was just a lot faster than us taking off,” Bell said. “We’re close, we just need a little more.” Bell came home with a 3rd place finish, that is until NASCAR deemed his car too low in post-race inspection and disqualified him. He’ll be credited with a 38th place finish instead. The #20 Joe Gibbs Racing team will have an opportunity to appeal the decision, they have until noon on Monday to appeal, according to Wayne Auton, managing director of the NASCAR Xfinity Series.

As for Joey Logano, he had some trouble early. After losing the lead to Custer in the first couple laps, a tear-off covered his entire front grille, forcing him to let Justin Allgaier by to clear his nose. By getting right behind the #7, he was able to create a vacuum of air to cause the tear-off to suck right off the front bumper.

Stage 2 wasn’t much different except that Reddick wasn’t creeeping behind Custer. Just like Stage 1, it even included a spin, this time featuring Ryan Sieg in about the same place in the same way as Justin Allgaier did in Stage 1. After some pit strategy that split the field, Custer gave up the lead to pit and went on to win Stage 2.

Following the Stage 2 caution, we got a spell of deja vu as Custer stayed out front for the first stint and Ryan Sieg spun out of Turn 2 again. After that, the race was on. Tight racing up front caused by some teams choosing to stay out, caused for a jockeying for position. This situation triggered the beginning of the end for hometown hero Allgaier, however. Jeffrey Earnhardt got loose in the middle of the pack, and Allgaier smacked the wall trying to squeeze outside of the 81. The damage was too great for the Illinois native to recover for a 2nd time. His day ended in the garage after getting in the wall again due to the extensive suspension damage.

The rest of the race was highlighted by a long green flag run that still had no shortage of racing throughout the pack. JR Motorsports teammates Michael Annett and Noah Gragson stayed out hoping for a caution, a strategy often used in NASCAR to gain position, but rarely works. But this time, it did. BJ McLeod got into the wall and brought out the 6th and final caution of the day nearing 25 laps to go.

While this gave Annett and Gragson the positions they wanted, it also put Custer right within striking distance. As soon as they crossed the line for the restart, the #00 dove to the apron and by the time they came around to complete the lap, Custer already had the lead well in hand. There was no looking back for the Stewart-Haas Racing team and they took home their 4th checkered flag of the season.

With the disqualification of Christopher Bell’s team, the points are shaken up quite a bit. Once official points are straightened out, they will be explained here as well as a separate post.

Race Results, pending due to a potential appeal