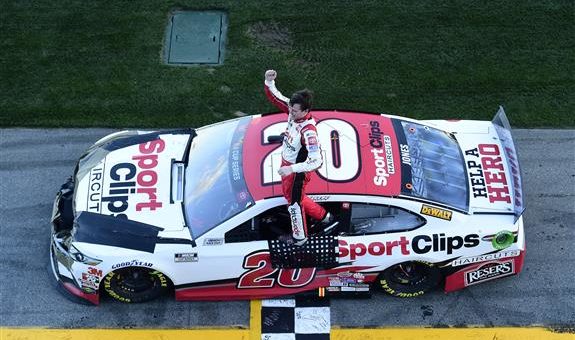 The nose on Erik Jones’ #20 Toyota was bashed in so much that it was flat. At 200mph, the hood was even flapping at a near breaking point, the car barely holding together. For a track like Daytona, there couldn’t be a worse aerodynamic hindrance. But when the rest of the field wrecks themselves and do it again, and maybe again, that junk of a race car could be a winner. And for Erik Jones, it was.

With the help of Joe Gibbs Racing teammate Denny Hamlin, who was a lap down and last among cars still running at the finish, Jones was pushed ahead of the rest all the way to the finish. “[Hamlin] stuck with us there that whole last lap,” Jones said post-race, “it wasn’t the fastest car I don’t think left in the race, but we brought it home. I owe him one for that, for sure.”

The calamity of the annual preseason exhibition event was exaggerated beyond recognition. Quite literally, too, as every single one of the 18 cars in the race were involved in one or more crashes at one point or another. “Got back on the lead lap, got in one wreck, then another wreck,” Jones said in Victory Lane, “I think we got in another wreck.”

Wrecks weren’t the only thing that the 23-year-old Michigan native had to overcome to win the race. During green flag pit stops, Jones overshot his pit box and locked up his tires, forcing him to back up on pit road and change tires while everyone else took a short stop for fuel and then were able to speed away. Jones explained the blunder while celebrating in Victory Lane, “I just missed the box, to be honest with you. Kind of knocking the rust off from last year.”

For the majority of the race, it was a train of single-file racing. The competition caution on lap 25 did little to shake things up as within five laps, it was a return to a single-file line of cars. The race continued on with very little side-by-side racing until green flag pit stops commenced well within the race. The Chevrolet teams and Joey Logano decided not to pit and save fuel instead. The second pack of cars consisting of mostly Ford and Toyota teams raced each other for a while before organizing into a single-file line and caught the lead pack.

Then came destruction. Logano and Kyle Busch racing made contact and triggered an accident involving six cars, including the #2 of Brad Keselowski who was not happy with how that wreck started. “That’s completely unnecessary,” Keselowski said on his team radio immediately after the crash, “I’m fine that was just the dumbest thing.”

With the 2nd incident in as many days for Keselowski’s Speedweeks, he voiced his frustration after leaving the infield care center,

“We just got wrecked for no reason. Just dumb, dumb racing. Just dumb moves being thrown out there. Guys that don’t know what they’re doing, so they throw crazy [expletive] blocks and it’s just ridiculous. We shouldn’t be wrecking all these cars.”

This was referring to the blocking move his teammate Logano made, who responded when told of Keselowski’s comments, “Yea apparently we all suck at this. ‘Cause there’s only like three cars running right now.” When FOX Sports’ Bob Pockrass asked if he would “mend fences” with his teammate, Logano smiled and said, “I’m sure he’s alright, we get along fine. I don’t think he’s mad at me.”

The race couldn’t even return to green flag racing before crashing again as a wreck on the restart involved ten of the 16 cars left in the race. It was reported that leftover oil on the track may have caused the cars to slip and slide when trying to accelerate.

Once the smoke cleared, the scheduled distance of the race had already been reached. This meant the race would enter “Overtime”. The field is given two laps to finish the race. If a caution happens before the leader takes the white flag (final lap), then there will be another attempt at the overtime procedures. If the leader has taken the white flag already and a caution comes out, then the race is over and the leader is declared the winner. Otherwise, it’s a race to the finish.

The 42 Annual Busch Clash saw three Overtime attempts as just two laps after the restart crash was cleaned up, Hamlin blew a tire while leading and consequently wrecked nearly the entire field. Eleven cars were involved in the crash, leaving just seven cars left to race to the finish.

Overtime attempt #2 included a three-car wreck between Kyle Larson and Chase Elliott, that also collected eventual winner Erik Jones. The left only six cars remaining in the race, five of which were still on the lead lap. Just about each of the six drivers had a shot at the lead in the third and final Overtime attempt, but once Hamlin locked bumpers with his young Joe Gibbs Racing teammate, it was smooth sailing for the driver of the incredibly damaged #20 Toyota.

It was Jones first win in the Busch Clash in his third attempt. It was the longest Clash in its 42-year history, clocking in at 1 hour 37 minutes and 51 seconds. The next action for the NASCAR Cup Series will be on Thursday night for the Bluegreen Vacations Duel races at 7p on FS1.