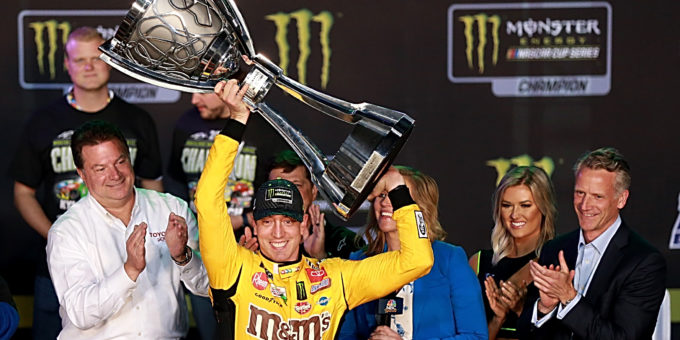 You’ve heard of the Lombardi Trophy, the Stanley Cup, now introducing the Bill France Cup. The new NASCAR Cup Series Championship trophy looks the same as the championship trophy (pictured) used since 2017. Officially, this is a brand new trophy, though the same height and weight as the old. A signature piece of the trophy are the layouts of all 24 Cup Series tracks on the top. As the potential rises for change in the track roster in future years, so will this part of the trophy. The openness to evolve this part of the trophy would allow for longevity for the overall trophy design.

The trophy is named after NASCAR founder Bill France Sr. and his son Bill France Jr. who collectively led the sport from its beginning in 1947 through 2003. The generations of the France family has continued to lead the sport as Jim France, son of Bill France Sr., currently serves as the Chairman and CEO of NASCAR. Bill France Jr.’s daughter Lesa France Kennedy became the Executive Vice Chair in NASCAR after the merger with ISC, which she was the CEO of. Her son, Ben Kennedy, has recently been promoted to Vice President of Racing Development.

To honor the legacy of the sport’s founding family, NASCAR today announced that the Bill France Cup will be awarded to the champion of the NASCAR Cup Series, beginning in 2020.

The renamed trophy pays tribute to Bill France Sr., who founded NASCAR in 1947, as well as his son, Bill France Jr., who elevated the sport to a national phenomenon as the sanctioning body’s chief executive from 1972 to 2003.

“As the sport ushers in a new era, it’s fitting that my father’s name is associated with the highest mark of excellence in our sport,” said Jim France, NASCAR Chairman and Chief Executive Officer. “My father and brother’s vision for NASCAR has been realized, many times over, as millions of fans follow and engage each week with the best racing in the world.”

The Bill France Cup, created by Jostens, will maintain the size and shape of last year’s championship trophy and will feature outlines of the 24 NASCAR Cup Series racetracks that comprise the 2020 season schedule. The trophy design will be updated as the race schedule evolves, and new tracks are introduced to NASCAR Cup Series competition.

Bill France Sr. spearheaded NASCAR from its beginning and directed it to its current role as the world’s largest stock car racing organization. Born in Washington, D.C., on Sept. 26, 1909, he came to Daytona Beach, Florida, in 1934. In 1947, France became the driving force behind the establishment of the National Association for Stock Car Auto Racing. The new organization was called NASCAR, resulting from a famous meeting at the Streamline Hotel on A1A in Daytona Beach – a structure that stands to this day as a racing landmark.

Things moved quickly in the 1950s and 1960s for NASCAR. As the sanctioning body’s first president, France built two superspeedways that came to personify the sport – 2.5-mile Daytona International Speedway and 2.66-mile Talladega (Ala.) Superspeedway. Bill Sr. passed away in 1992 at the age of 82.

Bill France Jr. is remembered as the man who followed his visionary father at NASCAR’s helm, in the process becoming a visionary himself as he guided NASCAR to unprecedented levels of popularity. France, who passed away in June 2007 at the age of 74, grew up in the formative years of stock car racing, living and learning every detail of the sport from his own experiences, and those of his father.

Bill Jr. became NASCAR’s president in January 1972, replacing his father and becoming only the second president of the world’s largest auto racing sanctioning body. His emergence coincided with the sport’s emergence, and its eventual ascent to become America’s No. 1 form of motorsports.

For more information on the NASCAR Cup Series and images of the inaugural Bill France Cup, please visit NASCAR.com.

Tom Bailey (@TomBaileyScoop) grew up in the backyard of Chicagoland Speedway, making a passion for all motorsports inevitable. Tom is entering his first full year of racing coverage in 2020 as the owner and founder of InfieldScoop.com. You can contact him at [email protected]infieldscoop.com