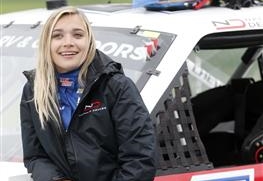 When the checkered flag flew at the end of Friday night’s NextEra Energy 250 at Daytona, all eyes were on the record-setting photo finish for the win. However, another record was broken at the same time. Natalie Decker, driving for Niece Motorsports, finished 5th in the race, breaking the NASCAR Gander RV & Outdoors Truck Series record for best finish by a female driver. It was also the best finish by a female driver at Daytona in any of the three NASCAR National Series (Cup, Xfinity, and Truck).

The finish was a complete 180 from Decker’s experience at Daytona one year ago. In that race, her left front tire cut down on the very first lap, caused a break in the oil line, and the truck caught in a huge fire. Decker was pulled out of the truck unharmed, but her Truck Series debut ended before it ever really began. Now, she walks away from Daytona as a history-maker for women in stock car racing.

Both records that Decker broke were previously held by Jennifer Jo Cobb when she finished 6th in the 2011 race at Daytona in the Truck Series. Cobb attempted but failed to qualify for the 2020 edition of the event. She still took the time to congratulate the 22-year-old from Wisconsin, along with a challenge for even bigger records to be broken in the future.

In 2011 I finished 6th @DISupdates – tonight my record as highest finishing female driver was broken by @NatalieRacing – CONGRATS!!! Now… c’mon ladies. Time for a W by one of us!!!👍🏼💪🏼🏁

Natalie Decker holds her place in history, for the time being, as the highest finishing female driver in one of NASCAR’s National Series, joining Danica Patrick (Xfinity, 4th, 2011) and Sara Christian (Cup, 5th, 1949). Decker is scheduled to run at least seven more races for Niece Motorsports in 2020, including next week at Las Vegas.