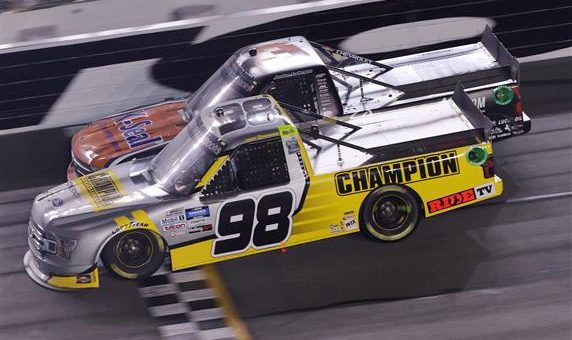 Coming to the finish, side-by-side, Jordan Anderson had the lead and was hundreds of yards away from his first career victory in a self-owned team. An underdog story for the ages. Grant Enfinger, however, had other plans. Hitting the side of Anderson’s #3, beating and banging coming to the stripe, Enfinger edged ahead of Anderson by just one hundredth of a second (0.010s). It was the closest finish in the NASCAR Gander RV & Outdoors Truck Series’ 21-year history at Daytona, and the 7th closest Truck Series finish all-time since the 1995 inaugural season.

WHAT A FINISH. GRANT ENFINGER WINS IN DAYTONA! pic.twitter.com/6butJVP2mB

It was Enfinger’s 3rd career victory, and first since Las Vegas in Fall 2018. The 35-year-old won the Regular Season Championship without a win in 2019, but wastes no time grabbing a trophy in 2020. Anderson’s 2nd place finish is the best of his career. His previous best came at the 2019 Talladega race when he placed 7th.

Anderson’s reaction to the events was pure elation, “I’m almost speechless for words.” The South Carolina native’s underdog story dates back several years in the Truck Series as he explained to FOX Sports’ Alan Cavanna,

“I came here, 2015, and emptied my bank account to try to come down here and run. To be in a position to even go for a win at Daytona, man. I’m a kid that just wanted to go racing from South Carolina.”

Codie Rohrbaugh, who spun by himself earlier in the race, Derek Kraus, and Natalie Decker all earned career-best finishes while rounding out the rest of the Top-5. Decker broke a record of her own by becoming the highest finishing female driver in Truck Series history with her 5th place finish. She also now holds the record for the best finish by a female driver at Daytona in any of the three NASCAR National Series (Cup, Xfinity, and Truck).

The Overtime finish was set up by a late crash that began when the lead pack was 3-wide for the lead. Johnny Sauter was pushing teammate Ben Rhodes in the middle. The two barely touched, if at all, and triggered a 14-truck wreck, taking out many of the fastest trucks of the race. Enfinger, Todd Gilliland, and Austin Hill somehow made it through with minimal damage while the rest of the remaining trucks were far enough behind to avoid the carnage.

The first stage of the race was highlighted but a scary incident about fifteen laps into the race. Pushing through the tri-oval, Gilliland bumped the #02 of Tate Fogleman. Fogleman got loose and clipped Austin Wayne Self, who spun into the #45 of Ty Majeski.

Majeski’s truck then flipped over onto its roof and skidded along the superspeedway at a high rate of speed before finally coming to a rest. The truck had to gently be flipped back over onto its tires, but Majeski was able to climb out and walk away. “Nothing like I’ve ever experienced before” Ty Majeski said after being released by the infield care center, “I’m not hurt, thankfully, just my pride”

Riley Herbst won the first stage, but since he’s earning points in the Xfinity Series, does not pick up the playoff point and 10 stage points. Grant Enfinger won the second stage and earns six playoff points total, when including the five received for winning the race.