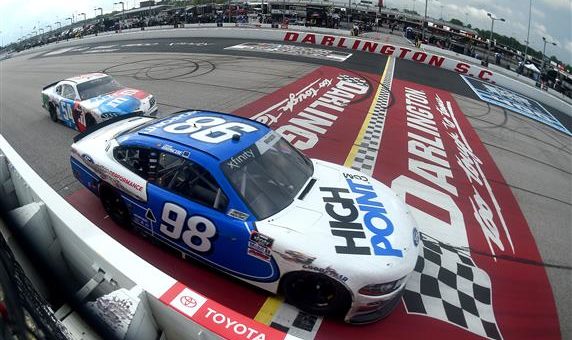 Chase Briscoe was leading the race in the closing laps of the Toyota 200 at Darlington Raceway, the first NASCAR Xfinity Race since March 7 due to the coronavirus (COVID-19) pandemic. His biggest threat was defending Cup Series champion Kyle Busch, who holds the record for the most victories in the Xfinity Series. The two traded paint and Briscoe got more than his fair share of Darlington stripes in the duel, but held on to win by just 0.086 seconds over Busch.

The win overcame Briscoe with emotion after tremendous hardship for him and his wife Marissa earlier in the week, that Briscoe explained in detail on Twitter. After climbing out of the car, the 25-year old driver from Indiana went down on one knee in tears.

Kyle Busch arguably had the strongest car of the day, starting back in 26th due to a random draw influenced by owner points. Busch had driven up into the Top-10 by the time of the competition caution at lap 15. With the help of his pit crew, Busch was given the lead and he dominated the entirety of the second stage, leading every lap from the green flag through to the stage end.

The next set of pit stops, it seemed the 2009 Xfinity Series champion had beaten everyone else on pit road again by a large margin. Instead, he had been issued a pit road speeding penalty and placed well back in the pack once again. With rain now threatening the race, the lead was a battle between Briscoe and Justin Allgaier.

In the long run, Briscoe had chased down Allgaier and took over the lead with the help of some traffic and Allgaier getting a piece of the wall. A late-race caution set up the final restart between the two Xfinity Series regulars with Kyle Busch right behind.

The drivers of the 98 and the 7 fought hard for the lead into the first turn, beating and banging, but Briscoe prevailed and Busch took the opportunity to take over 2nd. As the laps winded down, Busch inched closer and closer until 2 laps to go, the fight was on.

A final lap that’ll go down as one of the best at @TooToughToTame.@ChaseBriscoe5 holds off @KyleBusch in thrilling fashion and takes home an emotional Darlington win. pic.twitter.com/D2T12WM5z3

Prior to the beginning of the season, Briscoe told media he needed “to go win eight to 10 races” and that it was a “make-or-break season” for him. Now, five races into the season, he has reached victory lane twice. For those that think that’s a large enough sample size to indicate a trend, the Stewart-Haas Racing driver would seemingly be on pace for about 13 wins in a 33-race schedule.

Regardless of the expectations placed on Chase Briscoe triumphed over a Cup champion at a legendarily tough track all the while dealing with unimaginable personal hardship. The seats at the track may have been empty due to the pandemic, but no one would have used them anyway. The win was something worthy of a standing ovation for Chase Briscoe.