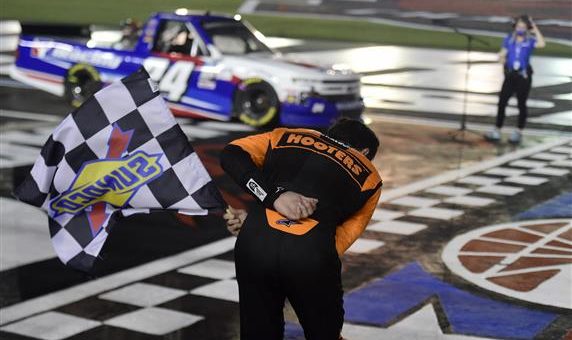 He’s not a “Mandalorian” and his nickname isn’t “Dog” but Chase Elliott was the bounty hunter trying to beat Kyle Busch in Tuesday night’s NASCAR Gander RV & Outdoors Truck Race. Busch took 2nd place with 20 laps to go but could not chase Elliott down as the driver of the #24 truck won the NC Education Lottery 200 at Charlotte Motor Speedway.

The 24-year old from Dawsonville, GA native celebrated by using Busch’s signature winning move, the bow to the crowd. As there were no fans in the stands for the event, Elliott bowed to the cameras.

“[The bow] is not a dig at anybody, just having fun with it,” Elliott told media in a post-race teleconference, “Hopefully nobody gets their feelings hurt over it…but if they do, they do. Whatever.”

Kyle Busch was upset after the race after coming in 2nd following a seven-race win streak dating back to June, 2018. The primary reason for his frustration came from an alleged broken part on his race truck, something he believed should not have been an issue after the long break in between racing.

“Doesn’t help showing up to the race track with broke parts on your truck,” Busch said. “Didn’t have our right front stopper right, so we were all over the splitter, so we came in and didn’t know that it was broke…Never was right.”

The issue arose during the competition caution on lap 15. Prior to the caution, Busch had driven up to 6th from his 16th starting spot. The race continued for 10 laps until the end of Stage 1. Busch did not gain much ground in those 10 laps and came to pit once again to fix the issue some more. He would then go on to lead 25 of the 134 laps in the race, opting to pit later and have fresher tires for the end of the race. The fresh rubber did not prove to be enough to make up for what was apparently a truck with broken parts.

“Self-inflicted, threw it away,” Busch continued to say post-race, “Had six months to prepare and screwed it all up.”

On February 21, 2020, Kyle Busch drove to victory for the 57th time in the Truck Series. Immediately the debate sparked up again about Cup drivers racing in the lower series. The next day, Kevin Harvick, who has won in the Truck Series 14 times himself, decided to make things a little more interesting.

I like this so let’s make this fun. I’ll put up a $50,000 bounty for any full time cup driver who races a truck and can beat @KyleBusch in his next 4 races. #gameon https://t.co/BRjLCTxFJQ

The $100,000 bounty was set and several Cup drivers were hungry to claim it. Due to the coronavirus (COVID-19) pandemic, the world had to wait 95 days for the Truck Series to return to action and for the bounty to be put to the test. In addition to Elliott, Cup Series rookies John Hunter Nemechek and Brennan Poole were also eligible for the bounty, should they have beaten Busch in the race.

Due to the extended break in action and the temporary lack of practicing and qualifying in racing’s return, NASCAR allowed the Truck Series field to be expanded from 32 to 40 trucks, the most in over two decades.

With the expanded field of trucks, the chances of some of those trucks not being fully up to speed and potentially in the way of others were higher than a race under normal conditions. In arguably the worst incident of the night, the #33 truck driven by Jesse Iwuji, which had been black flagged earlier in the race for failing to meet the mandated minimum speed, was running in the center of the frontstretch while Stewart Friesen and Brennan Poole were racing for position. Friesen made contact with Iwuji’s rear fender and turned him into Poole, triggering a 4-truck accident. It took another 20 laps and three more cautions before the race was able to have another green flag run longer than five laps. The race finished in a 27-lap green flag run.

Now that Chase Elliott has collected the $100,000 bounty for charity, Marcus Lemonis, chairman and CEO of Truck Series title sponsor Gander Outdoors and host to CNBC’s The Profit, has opted to continue the “bounty” fun in the series:

The next race for the Gander Outdoors & RV Truck Series will be Saturday, June 6 at Atlanta Motor Speedway as part of the revised NASCAR schedule.