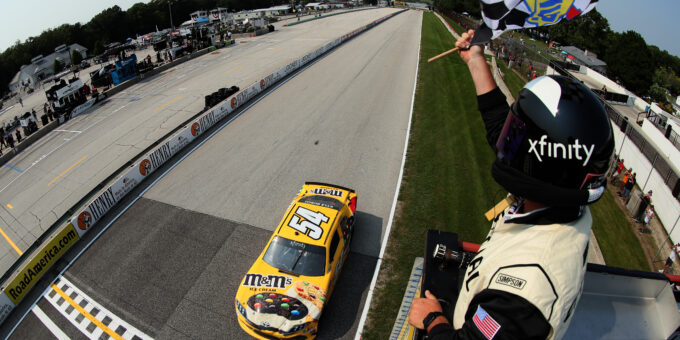 For the 101st time in his career, and for the 4th time in 4 tries in 2021, Kyle Busch took the checkered flag of a NASCAR Xfinity Series race. It did not come easy, however, as he had to come back from an early race spin to eventually pass road course ace AJ Allmendinger for the lead in the closing laps to secure the win.

Kyle Busch became the 12th different winner at Road America, a streak AJ Allmendinger was looking to end since he won back in 2013. This win also marked his 200th win with Toyota throughout NASCAR’s national touring series.

It was a roller coaster of a day for the younger Busch brother. It started out by wrecking his primary Cup Series car in the one and only practice for the weekend after completing only 6 laps. Despite that, he did post the 2nd fastest lap of the session.

Then, in the very first lap of the Henry 180, Kyle Busch spun while in the middle of a 4-wide situation on the narrow Road America straightway. He was able to climb back up to 3rd until he went for an offroad ride, sending him back several positions.

With under 10 laps to go, Kyle Busch found himself in a Top-10 position with fresher tires than the leaders. The main problem was that leader was AJ Allmendinger who swept both of the first stages. Adding to the difficulty was Austin Cindric being the leader of the fresh tires club of drivers and had led 10 laps already in the 45-lap race.

Cindric was caught up with an accident involving several drivers, clearing a path for Kyle Busch to be in prime position to battle for the lead. Busch was able to withstand the blocking attempts by AJ Allmendinger, even through frequent contact, and raced by with the fresher tires on to victory.

Allmendinger’s race continued to collapse at the end as both Daniel Hemric and Michael Annett were locked in an electrifying battle for 2nd with Hemric taking the spot in the end. This was Hemric’s 9th career runner-up finish and 37th Top-5 result, all while still searching for his first career victory. Annett, on the other hand, claimed his first Top-5 of the season and his first Top-3 since Chicagoland in 2019.

Rounding out the Top-5 was Allmendinger and Harrison Burton. Ty Gibbs, in the fifth #81 Joe Gibbs Racing entry, was running 2nd late before a transmission issue caused his car to stall with 11 laps to go. This marked only the 2nd time in his 9 starts that Gibbs has finished outside of the Top-5.

Jeremy Clements experienced a mechanical issue and took the car to the garage briefly. He eventually finished 28th, one lap down. As he is the cut-off for the Xfinity Series playoff with 8 races remaining in the regular season, this event carried major implications. Brandon Brown finished 11th, capitalizing as many points as he could on the situation. The gap between Brown and Clements for the final playoff spot is now down from 50 to 33 points.

The Xfinity Series now heads to Atlanta on July 10th at 3:00p on NBCSN, where Kyle Busch will be making his 5th and final Xfinity Series start of 2021 and it may also be his final career Xfinity race.