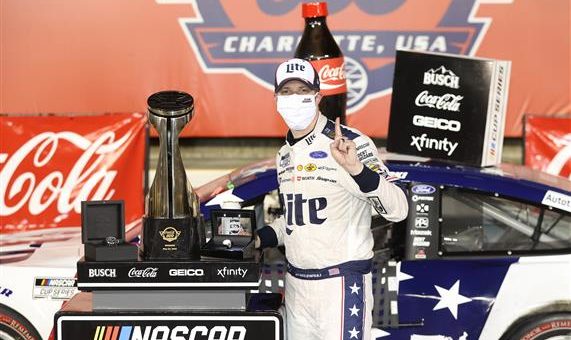 Update: Jimmie Johnson’s car has been disqualified after post-race technical inspection. This article has been updated to reflect this development.

Brickyard? Check. Darlington? Check. Bristol and Talladega? Check and check. Now Brad Keselowski has another “major” win he can check off the list, the Coca-Cola 600, and now the 2012 NASCAR Cup Series champion already has his eyes set on what’s left.

“It’s the Coke 600 and this leaves only one major left for me, the Daytona 500, so we’re checking them off,” Keselowski later continued to express his excitement while on the frontstretch, “I’m tickled to death. One left, the Daytona 500.”

The race was actually Chase Elliott’s to lose with two laps to go with Keselowski distant in the rear-view mirror until a caution came out to set up NASCAR’s version of overtime. The caution was triggered by Elliott’s teammate William Byron whose left-rear tire blew out just three miles shy of the 600-mile event. Elliott’s crew chief Alan Gustafson made the call to come down to pit road, giving up the lead and handing it right over to Keselowski.

All the Michigan-native then had to do was hold off Alex Bowman, who had led a race-high 164 laps, and Jimmie Johnson, a 4-time winner of the Coca-Cola 600 who was hungry to end his now 102-race winless streak. Keselowski received a strong push from the 88 and cruised to victory in his patriotic Miller Lite paint scheme, the only scheduled 2020 race for the long-time Team Penske sponsor.

“I’m not into stats. Never have been, never will be,” Johnson said about his current 102-race winless streak, “Just not something I spend time on.”

The 7-time Cup champion is in his final full-time season and has tallied 83 career wins (tied for 6th best all-time) but hasn’t found victory lane since June 4, 2017 at Dover. Johnson’s car, however, failed post-race inspection and was therefore disqualified and credited with a 40th place finish, taking away what would have been a runner-up performance.

Cliff Daniels, the crew chief for the #48 Hendrick Motorsports team, tweeted the following after the inspection was completed:

Disappointed about our post-race OSS. We think something must’ve broken but won’t know until we get it back to the shop tomorrow and can diagnose. Tough news after a strong night. This team is getting stronger We are focused forward. We’ll be back Wednesday with another great car

The trend of the race was the one-groove race track that provided a clear advantage to anyone leading the field. So much so that when Joey Logano and Kevin Harvick both stayed out during a caution with less than 20 laps to go in Stage 2, Logano had the lead and held on to win the stage while Harvick, on older tires, fell all the way back to 19th by the time the stage had concluded.

This made Elliott’s pass for the lead with less than 40 laps seem all the more impressive as he didn’t necessarily have fresher tires that would give them a strong enough advantage to overcome the “clean air” of the leader. The driver of the #9 Hendrick Motorsports Chevrolet was just that fast that he could wheel around the #2 of Keselowski under green flag conditions. The only thing that could stop him was an unfortunately timed caution and a pit call that didn’t work out.

“You just make the best decision you can based on the information you have,” Elliott told media in a post-race teleconference, “When you are leading the race like that, people behind you are going to do the exact opposite of what you do.”

Kurt Busch had started out in the lead until rain halted the race just 50 laps into the 400-lap event for over an hour. When racing resumed, Bowman took the lead on a 2-tire strategy call and continued on to win the first two stages of the race.

After Logano won Stage 3, it was Martin Truex Jr.’s turn to lead the way. Truex was looking to win his 3rd Coca-Cola 600 in 5 years having won the event in 2016 and 2019. However, a caution for the 51 car spinning during green flag pit stops shook up the lineup and set up the battle between Keselowski, Johnson, and Elliott that would continue to finish out the race.

If any story from the race has any lingering effects beyond Sunday night’s race, it will come from Denny Hamlin’s team. During the pace laps prior to the green flag, tungsten weights fell off of Hamlin’s #11 Toyota. The penalty for losing a tungsten weight is stated to be a four-race suspension for the crew chief, car chief, and head engineer. A costly penalty for a team that scored their second win of the season last Wednesday at Darlington.

The reason for the severity of the penalty is due to the safety hazard the tungsten creates when dropped onto the track, especially if it should happen at full speed. Fox Sports’ Alan Cavanna tweeted out pictures of when a flying piece of tungsten was struck by a car at race speed in 2015.

Expect added penalties for the 11-team. A loose part like that weight is a major safety issue.

Back in 2015 a piece hit Jamie Dick’s windshield and then his helmet pic.twitter.com/hZg1UX8iWR