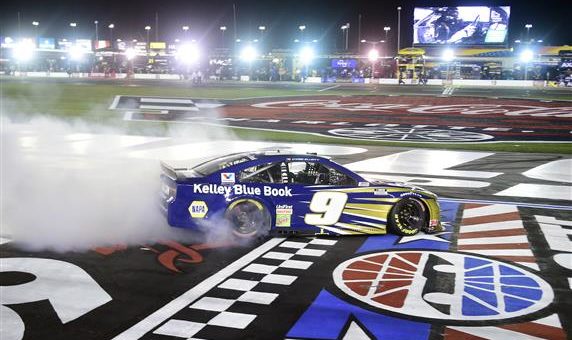 If Sunday night’s race was the Coca-Cola 597, Chase Elliott would have been cruising to victory lane at Charlotte Motor Speedway. However, with two laps to go, a caution and the decision to pit took away the win from the 24-year old Dawsonville, GA native. Fast forward to Thursday night, as the laps winded down, Chase Elliott was once again in the lead. Déjà vu began to set in but this time instead of a yellow flag, Elliott picked up the checkered flag in the Alsco Uniforms 500 for his 7th career NASCAR Cup Series victory.

Elliott had taken the lead from Kevin Harvick with 28 laps to go. Harvick led 63 of the 208 laps, most of all drivers, and seemingly had the fastest car all night. However, with about 30 laps to go, the #4 Stewart-Haas Racing Ford began to fade and eventually finished in 10th place. Harvick remains the only driver in the Cup Series to finish every race in the Top-10 in 8 races in 2020 and remains the series point leader.

Elliott told media in a post-race teleconference, “I think the race going long played into our favor as compared to what Kevin had to work with.”

It has been a whirlwind of a journey for the Hendrick Motorsports. He may have been holding up the “#1” finger in victory lane Thursday night but 8 days prior, he was showing the other “#1” finger at Kyle Busch after getting wrecked off the nose of the #18 at Darlington. Elliott had been chasing down Denny Hamlin for the win while on much fresher tires, but Busch had “misjudged the gap” and took Elliott out of the race in one swipe.

Then in the very next Cup Series race, Chase Elliott was in perfect position to win the race up until the final caution. Alan Gustafson made the call to pit and the rest of the field reacted by staying out, taking the win away from the #9 team once again.

“At the end of the day, he has to make decisions on the spot,” Elliott said about his crew chief Gustafson, “I feel like we were in a lose-lose position there on Sunday.”

As with any roller coaster of emotions, the ride always lifts after it dives down. Tuesday night, Chase Elliott claimed the Truck Series bounty on Kyle Busch, and lightheartedly stole the bow, bringing the week-long events full circle to an extent. The one thing still missing was a Cup Series trophy and with luck, Elliott found it at Charlotte Thursday night.

“Just had some good fortune and things went our way.” Elliott said.

Despite being the shortest in number of laps, the first stage took longer than normal, or perfectly normal, for the 2020 season so far. The stage included a wreck on lap one, a competition caution, and an hour long rain delay. Ford beat the Chevrolet’s to the stage end while the Toyota’s were snubbed of any stage points. Joey Logano led the field to the green-and-white checkered flag to mark the end of the stage earning his 12th playoff point of 2020.

For the fourth time this season, Alex Bowman won a stage and collected the playoff point that comes along with it. Rookies John Hunter Nemechek and Christopher Bell showed strong runs by also collecting stage points. Kevin Harvick had pitted from the lead during a caution in the middle of the stage, handing the lead over to the 88 of Bowman. Both Harvick and Chase Elliott raced their way back through the pack to finish the stage in the Top-5.

The next stop for the NASCAR Cup Series is Bristol, TN just three days away on Sunday, May 31 at 3:30p ET on FS1. Kyle Busch won last year’s spring race at Bristol Motor Speedway and has won 3 of the last 5 Bristol Cup races overall. Due to the Charlotte race being postponed to Thursday night, the NASCAR Xfinity Series race at Bristol, originally slated for Saturday, has been moved to Monday night.